What’s going on around the community remotes, skins, and addons

Rather than focusing on developer work within the team, we thought we’d switch this post up to focus on work by the community at large. But before we do, a quick announcement.  For those of you who don’t already know, we’ve decided to name XBMC 12 (the one coming after Eden*) Frodo, after one of the three XBMC founders.  You can learn a bit more about Frodo here. As always, the Team wishes him well over at MediaPortal.

Now, let’s take a look around the community: 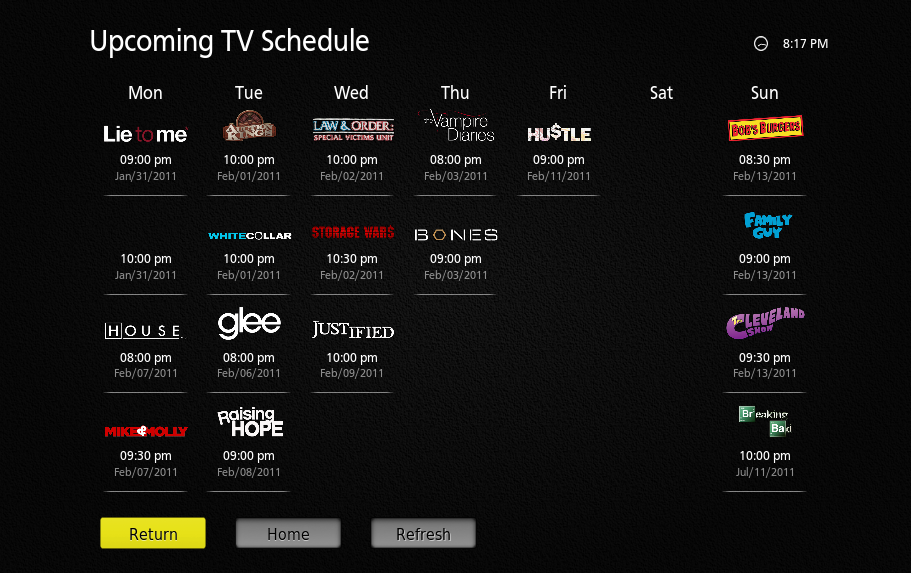 First, continuing our discussion of XBMC remotes we had last week, Heiner Bach has created the XBMC Commander app for iOS.  Check the link for all kinds of picture goodness, and visit the XBMC Commander forum post to learn a bit more of how XBMC Commander came to be. The important bit is that XBMC Commander is at v2.0+ and stable. Most reviews of this software remote appear to be positive, and Heiner does a great job of keeping up with JSON-RPC to keep his remote as up to date as possible.

A few caveats: due to recent code changes, XBMC Commander won’t work with XBMC nightlies, so it is recommended that you use the officially supported XBMC 10.1. Also, XBMC Commander costs $3.99, which isn’t a terrible price in the iOS universe, particularly not when you get some well coded software. However, if you don’t have an iOS device, that price could swell a little.

Also, if you do have an iPad, we hear jailbreaking it might be fun…

Next, we turn to the TV Guide found within the skin Simplicity, coded by skilled skinner Chase Williams (igotdvds). As Chase was working on Simplicity, it struck him that the Next Aired script (also available in the addons section and made by skilled python coder ppic) was not being used by skinners to its full potential. He wanted a simple way to see which of his shows was coming up soon, and which were a few weeks or months away, and he wanted all this info visible on a single screen. After a great deal of messing around with xml files and bugging people for help (big thanks to skilled skinner Hitcher there), he got the entire setup working.

Since coding the TV Guide, Chase has released it into the wild, where it’s been incorporated by a few other attractive skins, including the recently released Neon, which is a mix of Aeon and Night by brilliant user and skinner Stoli. Visit the forum to learn more about Neon and feel free to download it from the skins addon section within XBMC. TV Guide has also be reportedly incorporated into Shade and Transparency (both of which may be found in the skin addon section). Update: It appears it also exists in Back Row.

Finally, many of you have been asking about incorporating XBMC into your social networks a la Boxee. While there is no native method for incorporating XBMC into any social networks, The website trakt.tv does provide a social networking plugin designed to help you share your likes and dislikes. This plugin can be downloaded from XBMC’s official TV plugin directory within XBMC, but before you download it, it is recommended that you sign up at trakt.tv and take a quick look at the forum post about the plugin.

That just about wraps it up for this post. Keep an eye out for this week’s Feature Friday and we hope to get some developer news to you sooner rather than later. Until then, watch a movie or TV show or something!

*To head off any requests and questions, Eden will be out when it is finished, and not a moment sooner. We appreciate your curiosity, but we’ve still got a ways to go.

Pi CaseHouse your Raspberry Pi in this custom Kodi case